skip to main | skip to sidebar

Among the many items that my grandfather brought back after the Great War were some very nice examples of "Trench Art". The picture below shows a pair of Bosche artillery shells reworked with a couple of infantrymen characterizations. 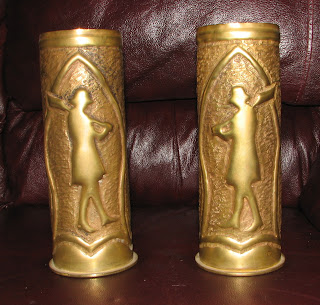 Many photographs are available of artillery shells made into various items. However, I have yet to see an image of the bottom of the shell. So I have added the second photo that shows the markings on the shell's base. Perhaps it will be of interest to a Bosche artillery historian. Note: I altered the properties of the image to sharpen the details. Click on the image for an enlarged view. 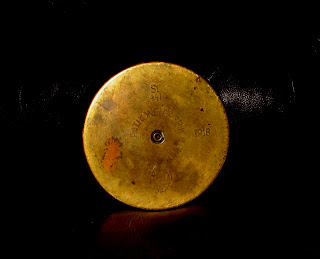 I welcome anyone to chime in with information about this shell casing. Dimensions: 9 inches/22.86cm tall, and 75mm average diameter at the open.
Posted by Major at 7:32 PM No comments:

A Short History of USAAC in World War I

The United States Army Ambulance Corps was a service born at the beginning of the First World War in 1914. In September of 1914 the concept of the United States Army Ambulance Service came about via a Professor of Classics, Richard Norton. Norton, having visited an American Hospital overseas, realized that delay in the transportation of battle casualties from the front to hospitals often resulted in higher mortality, and intensified suffering. 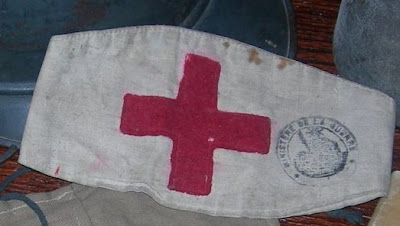 My grandfather's arm band that he wore during his time in Section 625. Note the French "Minister of War" stamp.

Norton arranged for a dozen Ford Model T automobiles, donated by Americans, to be converted into ambulances marking the beginning of the United States Army Ambulance Service. Including United States Army Ambulance Service (USAAS) the service took on other names: American Field Service and the commonly known USAAC or United States Army Ambulance Corps. The new ambulance service, manned primarily by college age volunteers from the Unites States, replaced the French Transport Corps. The French Transport Corps utilized horse drawn wagons to transport the wounded Poilus (soldiers) to aid stations behind the front lines. The French wagon trips were brutal: Few of the wagons had springs, and the arduous trip compounded the agony of the already wounded men.  USAAC ambulances were able to shorten the trip to twenty or thirty minutes compared to an hour long plus journey in a French horse drawn wagon.

Volunteer members of USAAC were each assigned to a section. Each section consisted of twenty to thirty men and each group was assigned a Sanitation group to serve only one section. The Sanitation groups consisted of men who were trained in First Aid and had some medical training. Later in the war the section numbers grew to around 40 men each, and some groups were combined later in the war. For example, Forsyth was originally a member of section 88 which was later combined making Section 625. By October of 1915 the service was associated with the American Red Cross. It had 60 ambulance cars and had carried over 28,000 wounded. By 1917, after America entered the war, USAAC had over 100 “ambulance cars” in service.

Each section had detailed duties they performed. Some of the tasks included taking apart and putting together vehicles. When a group of men first arrived from American they had to take apart ambulances and load them up on a carrier which would transport them closer to the front. After both the men and the vehicles reached a destination the drivers were required to unload the parts and put together the ambulances. The ambulance crews were also in charge of loading the proper supplies on to each ambulance and making sure each first aid station was supplied with enough materials. 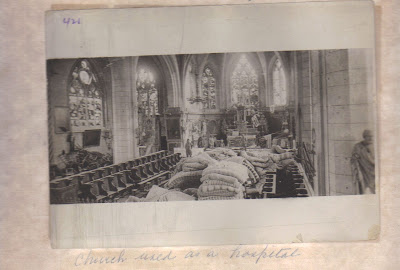 Church edifices were often used for locating field hospitals. The photo, above, shows the preparation of one such church in 1918.
Other support functions provided by USAAC included  mobile hospitals. These hospitals had a capacity averaging around 140 wounded. Each Section had the ability to pack up the hospital completely, transport to a new location, and then reset in less than three hours, a precursor of the MASH units of later years.

It is not possible to accurately state the number of wounded men whose lives were saved because quick transport to field hospitals was available. However suffering was reduced, and those on the home fronts, both in Europe and in the States, appreciated knowing that the men of USAAC were there in the middle of it, ready and willing to provide aid.
Posted by Sherry at 8:24 AM 3 comments:

The photo below was taken May 2, 1918. Members of U.S.A.A.C. Section 625, receive the Croix de Guerre for bravery in action on April 17, 1918, having crossed a "zone violently bombarded by the enemies artillery" to continue to remove wounded from the battlefield.

Shown is Colonel Bertrand, 162nd French Infantry, pinning the medal on the coat of Rex Forsyth. Note that the helmet Rex is wearing is shown in a photo below, and also note in the right background that you can see the front end of one of the Model T Ford Ambulances. 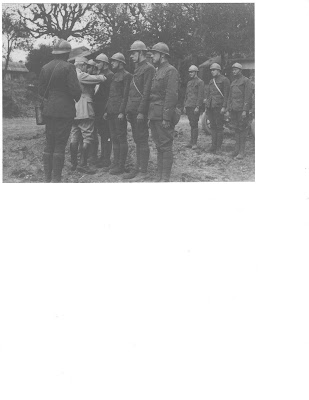 This is a May, 1918 clipping from the Bloomington, Indiana newspaper, recounting the events that led to Rex Forsyth receiving the Croix de Guerre. The paper quotes the citation, also visable in Rex's diary, pictured below in another entry. Note that when Rex quotes the citation, that the name of the French Colonel, and the number of the Regiment as well are both left blank by the newspaper. This is an example of wartime censorship in the name of security.

Also of note is the newspaper's use of the term "Hun". "Hun", like the term "Bosche", was used by the Allies to refer to the German soldiers. 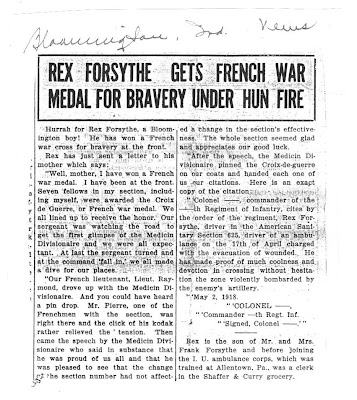 Posted by Sherry at 3:29 PM No comments:

Because Section 625 was attached to the French Army, there were no restrictions on taking and having photographs, unlike the U.S. forces, where strict censorship prohibited the troops from taking pictures for private use. 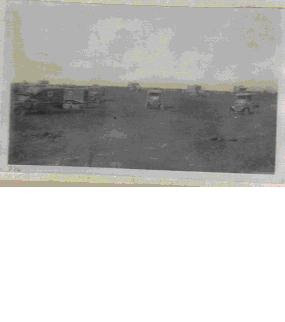 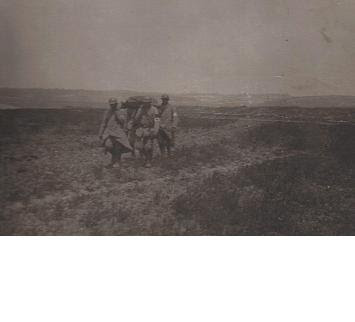 Stretcher bearers carrying a wounded soldier to one of the Sec. 625 ambulances. 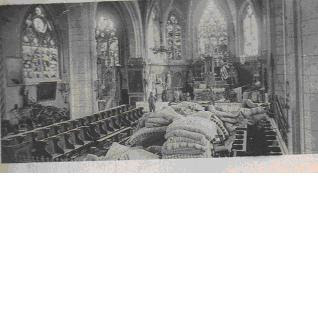 Interior of a Church, being prepared to be transformed into a field hospital.

Churches, being some of the largest buildings in any area, were often utilized as hospitals and Military Headquarters buildings.
Posted by Sherry at 5:02 PM 2 comments: 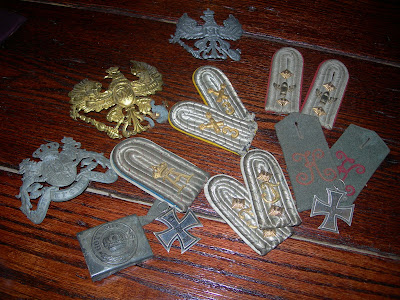 Rex often told the story that common practice was for the Bosche POW's to be lined up and walked through a single gate into the compound where they were held before being sent behind the lines. Rex and his fellow medics and the French Poilus (soldiers) would strip the POW's of any hidden weapons, insignia, belts, medals, accoutrements, or anything that might later be used for a tool for escape.

In his diary he recounts the story of a Bosche POW who had a hidden grenade, and then threw it at a group of officers. The grenade failed to explode. A French Poilu "dispatched" him straight away with his pistol.

Upper left and top: Three helmet "trimmings” denote the particular regiment to which the soldier belonged. These were attached to the front of a leather spiked helmet.

The other items are epaulettes, worn on the shoulders of the uniform. The different trimmings identify the branch of service and regiment. The plain grey ones are for the lowly privates!
And may I add: I mean no disrespect for the German soldier during The Great War by my use of the term Bosche, admittedly a "slang" term of negative connotation. However, this is the term my granddaddy always used, and I will continue to use same.
Posted by Sherry at 9:57 AM No comments: 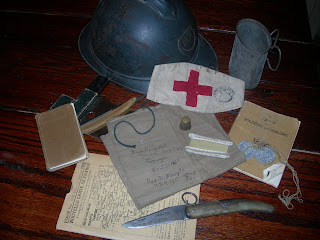 Rex R Forsyth, from Bloomington, Indiana, volunteered with a group of other Hoosiers who were mustered into the Army, and did their training in Allentown, Pa. This is where he learned to drive the Ford Model T vehicles. The training took place at the Fairgrounds in Allentown.


Upon deployment, his unit was attached to the French Army. He wore a US Army uniform, but wore a French Army helmet, and was issued other items from the French. Rex kept a daily diary, in which he recorded all of the areas in which his unit was stationed. This diary, containing concise and detailed accounts, does not graphically describe the horrors of the war, but mainly recounts where they were, when, and details of the life of the unit behind the lines. Underlying these words, however, one can sense the horrors that he witnessed.


In the photograph you see some of the items that Rex carried. Note the helmet issued by the French. The red cross arm band is stamped from the French quartemaster corps, as well. His dog tags are the small round dics, lower right, resting on a song book of US military songs. The folding knife was used to cut bread, often dipped into coffee poured into the drinking cup also shown. The khaki cloth with Rex's name inked is his "housewife", used by soldiers for decades to hold their sewing kits, small personal items, and pens or pencils. Under the small bible you can see his straight razor and metal shaving mirror. 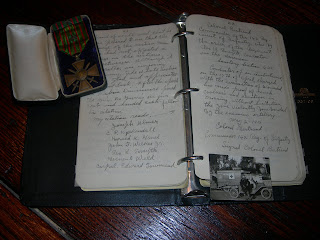 This photo shows his diary, a snapshot of him next to his Model T Ford ambulance, and his French Quoix de Guerre, or Cross of War, of which he and some of his fellow Unit members were awarded for bravery while crossing a field under heavy artillery fire while picking up wounded.

Please click on the photos to open them in a seperate window for detailed viewing.


More stories and additional photographs will follow in other posts.
Posted by Sherry at 6:43 AM 2 comments:

REPRO-RATIONS: Unique, Authentic War Memorabilia is a truly remarkable source for authentic period rations and historical information.
Our Story can be described as the best source for the complete history of US Field Service to be found.